I knew I had to make my own statement or go on for the rest of my life depending on someone else to be the creative genius. I didn’t want to live with myself that way.

It’s funny, in the early days, we [Missing Persons] thought that we could get a record deal in six weeks. We thought, “Hey, we’re writing these great songs, we played with Zappa and U.K.—we’ll have no problems.” Little did we know that it was the beginning of the serious crunch in the music industry, and people who we were giving tapes to one week were literally no longer there the next week when we went back to see how they liked them. No one had any money. No one was willing to take a risk on anything new.

It was a very difficult time, and yet that was one of the most beneficial situations that we could have been in, because we had to go out and make it happen on our own. We started taking control. We realized that, if we didn’t do things ourselves, they weren’t going to get done. 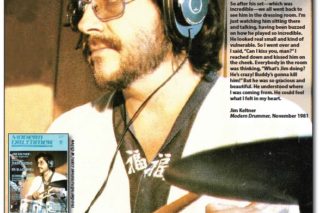